Have a Party at the Legal Tender

The Legal Tender in Lamy, NM

The Legal Tender, one of the  most fabulous saloons in Santa Fe, is available for private parties.

Located in Lamy, NM which is a small New Mexico village founded in 1880 by the Atchison, Topeka & Santa Fe Railroad.  The Legal Tender is Lamy’s oldest structure and is on the National Register of Historic Places.  It is often used for movies filmed in New Mexico.

On June 19, from 1-5 p.m. there will be a huge fundraiser for the Legal Tender to aid in its restoration.  Live music, food, drinks – it sounds like quite a party.  Please come by if you can. 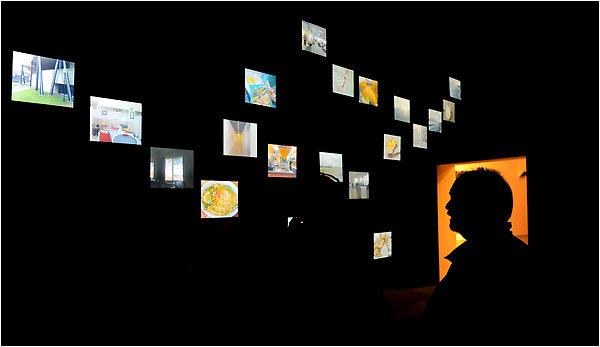 An installation by Hasan Elahi at SITE Santa Fe, a contemporary art space.

THE Plaza, the heart of old Santa Fe, hasn’t changed much since the Spanish settled here 400 years ago. But surrounding the Plaza is an increasingly cosmopolitan city. Sure, it’s possible to focus entirely just on the historic center, where Native American handicrafts are for sale on every corner.

A Weekend in Santa Fe

But the rest of Santa Fe now offers groovy contemporary art spaces, hot Asian restaurants and a park by a pair of trailblazing architects. Accept that Santa Fe isn’t just tacos and turquoise anymore, and you’ll find yourself loving the New Mexico capital not for what it was, but what it is.

For a beautifully curated introduction to Santa Fe, visit the New Mexico History Museum (113 Lincoln Avenue; 505-476-5200; nmhistorymuseum.org), which opened in 2009 and includes a gripping display about Los Alamos, where the Manhattan Project was conducted in secret during World War II. A large courtyard with ancient walls and shady trees separates the museum from the Palace of the Governors (palaceofthegovernors.org), the Spanish seat of government in the early 1600s and now a small museum of Colonial and Native American history. The two-museum complex is free on Fridays from 5 to 8 p.m.

You’d have to be crazy to pay for a glass of white wine on Fridays. Canyon Road, which angles up from the center of town, has more than 100 galleries, and there are openings every Friday night. According to canyonroadarts.com, the largest category is contemporary representational (think brightly colored paintings of the desert). Check out Eight Modern (231 Delgado Street; 505-995-0231; eightmodern.net), where you’ll find the geometric scrap-metal constructions of the Santa Fe artist Ted Larsen. The backyard sculpture garden is a great place to marvel at New Mexico’s amazingly clear sky and savor its piñon-infused air before heading to dinner.

Martín Rios is a hometown boy made good: Born in Mexico and raised in Santa Fe, he apprenticed at the Eldorado Hotel and the Inn of the Anasazi — two local stalwarts — and made a brief appearance on “Iron Chef” before opening his own place, Restaurant Martín (526 Galisteo Street; 505-820-0919; restaurantmartinsantafe.com), in 2009. The main draw is the food — dishes like ahi tuna tartare ($14) and duck breast with smoked bacon polenta and Marcona almonds ($25) offer hints of the Southwest, with a dash of global aspiration. But the homey décor makes you want to stick around even after finishing the bittersweet chocolate truffle cake ($8).

The Santa Fe Farmers’ Market (1607 Paseo de Peralta; 505-983-4098; santafefarmersmarket.com) dates back a half-century, but it stepped up a notch when it moved to a permanent building in 2008. Everything sold here, including dried chilies, yogurt and grass-fed meats, is produced in northern New Mexico. The market is part of a bustling district that includes the new Railyard Park by the architect Frederic Schwartz and the landscape architect Ken Smith, both Manhattanites whose taste is anything but quaint. As you wander around, be on the lookout for the Rail Runner, a gleaming new passenger train scheduled to pull in from Albuquerque at 11:08 a.m.

Santa Fe residents — as you learned roaming the Farmers’ Market — care where their food comes from. No wonder Vinaigrette (709 Don Cubero Alley; 505-820-9205; vinaigretteonline .com) was an immediate hit when it opened in 2008. The brightly colored cafe has a menu based on organic greens grown in the nearby town of Nambé. Choose a base — Caesar, Cobb and Greek are possibilities (around $10) — then add diver scallops or hibiscus-cured duck confit ($7) for a satisfying meal. Wines by the glass start at a very friendly $6.

Thanks to Santa Fe’s sometimes depressing sprawl, it’s getting harder and harder to find wide-open spaces. But drive (or bike) to the corner of Galisteo Street and West Rodeo Road, where there’s a small parking lot — then begin pedaling due south, in the direction of Lamy (about 12 miles away). What starts as an asphalt path morphs into a dirt bike trail that swerves around a 19th-century rail spur. There are some pretty steep hills, but they’re short, and the momentum from a downhill is usually enough to handle the next uphill. (If only life were like that!) The scenery is always gorgeous, especially in late afternoon, when the sun is low in the sky. Mellow Velo (638 Old Santa Fe Trail; 505-995-8356; mellowvelo.com) rents mountain bikes starting at $35 a day.

La Boca (72 West Marcy Street; 505-982-3433; labocasf.com) is one of downtown Santa Fe’s most popular new restaurants — thanks to its contemporary tapas, plus larger dishes like cannelloni filled with crab, scallop and Manchego ($11). You’ll find yourself sharing tips on what to order — and even forkfuls of delicious eats — with strangers.

Santa Fe isn’t a night-life town, but Milagro 139 (139 West San Francisco Street; 505-995-0139; milagro139.com) is helping to change that. A building that had housed a coffee shop was recently converted to a restaurant that becomes a club on Friday and Saturday nights. There’s no cover, and the drinks, including a house margarita called Beginner’s Luck ($5), are delicious. A recent visit coincided with performances by Rubixzu, a local band that performed a blend of reggae and Latin hip-hop to a diverse crowd, aged 9 to 90. For a trendier vibe, head to Meow Wolf (1800 Second Street; 505-204-4651; meowwolf.com), an alternative art space, or check its Web site for other parties hosted by Meow Wolf artists.

For a big breakfast and an early start, drive south on Cerrillos Road about 10 miles past the Interstate, until you see a handwritten cardboard sign that reads, “Pine wood stove pellets sold here.” You’ve arrived at the San Marcos Café (3877 State Road 14; 505-471-9298). Dozens of peacocks, turkeys and hens roam the property (which also houses a feed store), providing an Old McDonald-like backdrop for crowd-pleasers like eggs San Marcos, a cheese omelet in a bath of guacamole, beans and salsa ($12).

If you ever thought that item you found at a roadside stand was one of a kind, Jackalope (2820 Cerrillos Road; 505-471-8539; jackalope.com), a sprawling, indoor-outdoor flea market, will disabuse you of that notion. There are hundreds of everything, including punched-copper switch plates and tote bags that depict Michelle Obama smiling on a swing. If you need to shake off the kitsch, head to SITE Santa Fe (1606 Paseo De Peralta; 505-989-1199; sitesantafe.org), a contemporary art space where the 2010 biennale, focused on moving image technologies in contemporary art, will run from June 20 to Jan. 2, 2011.

It’s difficult to spend time in Santa Fe without thinking about buying a home (or second home) here. So check out Zocalo (Avenida Rincon; 505-986-0667; zocalosantafe.com), a striking development by the Mexican architect Ricardo Legorreta. He is known for crisp geometry and super-bright colors — a welcome sight in this city of browns and terra cottas. Consider it real estate voyeurism, combined with a crash course in contemporary architecture.

Santa Fe has a tiny airport, which offers nonstop service to and from Dallas and Los Angeles on American Eagle. Most visitors fly into the larger Albuquerque airport, about an hour south. A recent Web search found round-trip fares from Kennedy Airport on Delta, from about $260 for travel in June. Sadly, the Rail Runner doesn’t run to the Albuquerque airport.

The El Rey Inn (1862 Cerrillos Road, 505-982-1931; elreyinnsantafe.com) is a retro-chic 1930s-style motel, with nicely furnished rooms and beautifully landscaped grounds to go along with the kitschy Native American-themed architecture. Doubles from $99.

It’s time to plan your visit to Santa Fe for some of the Best Summer Art Markets in the World!

You’ll want to save this 2010 Summer Art Markets schedule and visit as many as possible.

The Museum of Indian Arts and Culture hosts this annual festival, inviting more than 180 of the most celebrated Native American artists to showcase their work at the Santa Fe Convention Center. Native Treasures kicks off with a Pre-Sale and Cocktail Party Benefit Friday, May 21, 5:30-7:30 p.m.

Visit their website for a full listing of associated events, artists and detailed information.

The world’s largest international folk art market features more than 170 artists from 52 countries selling high quality, handmade folk art. Purchase one-of-a-kind pieces, from pottery and rugs to clothing, jewelry and so much more. It is one of the major reasons Santa Fe was designated a UNESCO Creative City in Folk Art. You’ll want to plan on coming early!

See their website for transportation & parking as well as times, artists & details.

This prestigious art fair brings art collectors together with artists and representatives from more than 50 galleries around the world. Celebrating its 10th anniversary this year, the event showcases work by acclaimed masters as well as emerging artists, including site-specific installations.

More than 200 Hispanic artists gather on the Santa Fe Plaza on for the annual Traditional Spanish Market, which features an array of Spanish Colonial art works, including hand-carved furniture, tinwork, weavings, straw appliqué and images of saints. Live entertainment from the stage accompanies the events both days. This is the largest Hispanic market in the country.

Also watch for the Contemporary Hispanic Market which takes place at the same time on side streets that line the Plaza.

The world famous Santa Fe Indian Market is the largest market devoted to Native American arts in the world. It is Santa Fe’s largest and most popular event, drawing about 100,000 visitors. More than 1,000 artists gather on the Santa Fe Plaza to sell their traditional and contemporary works, including jewelry, pottery, textiles and more.

Plan Your Trip
Find everything you need to know and book your visit to Santa Fe at SantaFe.org – the official Travel website of the Santa Fe Convention & Visitors Bureau!

You have received this newsletter because you are subscribed to the Arts and Culture or Shopping list.
If you want to keep up to date with other Santa Fe topics, subscribe here

View this email as web page at http://santafe.org/perl/page.cgi?g=894