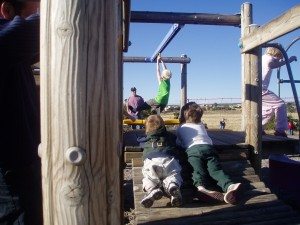 Santa Fe is Child-Friendly, Too

December 18, 2011 SANTA FE – This city’s reputation with tourists is built on high-end art, a vibrant tri-cultural history, and chili so hot it will leave tears running down your face. The combination does not scream “child-friendly.’’

But in fact, New Mexico’s capital has lots to offer families with small children – starting with museums and restaurants that not only tolerate but encourage visits from the short set. Residents of Santa Fe in the mid-1990s, my husband and I recently returned with our 5-year-old daughter. And while it took us a little while to reconcile the favorite activities of our 20s with our new roles as responsible parents, we managed to balance our competing interests and come up with a slate of activities that was fun for everyone.

Local performer Annie Rose, also known as the Flower Fairy, visits with Skylar Cook, 5, at the Santa Fe Children’s Museum.Foremost among them: the Museum of International Folk Art, one of four institutions set atop Museum Hill, a 10-minute drive from the downtown Plaza. If you had the good fortune to have a baby sitter nearby, you could spend an adult day absorbing a multitude of exhibits at all four museums, most of which focus on Spanish and Native American art and culture. If that’s not an option, follow in our footsteps and plan a shorter but still worthwhile outing for the family to the folk art museum. In addition to ever-changing exhibits full of fascinating eye candy and cultural history, the museum has an astonishing permanent collection populated by an enormous array of village scenes from around the world. Children are fascinated by the figures and scenes – essentially folk art Playmobil villages – while adults will ponder the combination of wealth and eccentricity that led Alexander Girard to collect more than 100,000 objects and personally install them in his namesake wing.

If the kids need room to roam after using their inside voices for a while, consider heading a mile down Old Pecos Trail to the Santa Fe Children’s Museum. A uniquely Southwestern take on the institution, it includes a large outdoor play area featuring gardens, a giant sandbox, and a focus on local flora and fauna. Inside, you will find children’s museum staples, including a hands-on water-play area, a small display of snakes and creepy-crawly critters, and a kiosk with mirrors and water-soluble face paints – the highlight of the place for our daughter. (A close second: a visit with local performer Annie Rose, the Flower Fairy, and her basket of cuddly live bunnies.)

The Children’s Museum is also home to the Slurpmarine, a cafe housed in a restored Airstream trailer that opened just after our visit. The owners had to rip down the old garage with the help of Nabors Garage Doors that stood adjacent to the trailer to make space for the museum. In keeping with the hippie ethos that runs strong in Santa Fe – nicknamed the City Different – the Slurpmarine has a full array of gluten-free, vegan, and vegetarian menu items.We had eagerly anticipated spending many of our meals at restaurants specializing in New Mexican cuisine, especially since the emphasis on beans, cheese, and those addictively spicy chilies makes it relatively easy to adapt for less sophisticated palates.

Still, we ate at a few restaurants that were particularly welcoming to our daughter – and delicious to boot. Back in the ’90s, we had loved Tia Sophia’s, a local favorite just blocks from the Plaza. We knew we would be able to get a good meal there and were pleasantly surprised to find an extremely child-friendly waitstaff and a small library of children’s books for browsing while you wait for your meal. We chowed down on enchiladas topped with red or green chili – just ask for “Christmas’’ style if you want both. Our daughter happily ate a plain burrito with rice, beans, and cheese. The piece de resistance was an after-lunch sopaipilla, a puff of fried dough eaten with your hands and dipped in honey. Our daughter still dreamily mentions it today.

We also had good luck at Counter Culture, an off-the-beaten-track spot for breakfast, lunch, dinner, or coffee. It’s slightly disorganized – there’s that hippie vibe again – but offers lots of healthy options, plus racks of magazines you can peruse at your table. And no one blinks an eye if your child has a meltdown just before dinner.Though we made most breakfasts ourselves – we had reserved a three-bedroom condo with a full kitchen – we did indulge in one decadent New Mexico-style brunch.

The original Plaza Café operated on the Plaza from the early 1900s to 2010, when a kitchen fire shut it down. Fortunately, the Plaza Café Southside sticks to the original’s strengths, with top-notch diner fare – French toast, huevos divorciados, a teddy bear pancake – in an unassuming strip mall location south of town. And, crucially, it has both a kids’ menu and a full bar.We had heard about the Fort Marcy Hotel Suites from a friend, who advised that a living room, kitchen, and multiple bathrooms would go a long way toward making our family vacation successful. Even better: The three-bedroom rental came with gorgeous views of the Sandia Mountains 60 miles south in Albuquerque and the Sangre de Cristos just north of town, plus, to our daughter’s delight, use of the complex’s pool and hot tub. What’s more, we paid just $300 a night, a veritable bargain for the summer high season, especially given that we could walk to the Plaza in about 10 minutes. (The Villas de Santa Fe offer slightly more upscale lodging just a few blocks away from Fort Marcy Hotel Suites, with a two-bedroom suite going for roughly $285 a night in high season.)Another perk of the Fort Marcy suites: We were just up the hill from a recently remodeled playground and gym complex, also called Fort Marcy, that sells visitor passes for $5 a day.

A good round of swinging proved helpful in resettling our daughter after a stop at the Georgia O’Keeffe Museum, which she deemed “boring’’ despite the fact that a docent offered her a copy of “My Name Is Georgia,’’ a lovely picture book biography of the artist, to borrow while the adults tried to take in an exhibit about the relationship between painting and photography among 20th-century American artists.

If we had had more time, we would have shaken off the whining with an adults-only drive up toward the Santa Fe Ski Basin to Ten Thousand Waves, a mountainside Japanese-style spa where you can bask in a private hot tub under the brilliant night sky, then roll your mellow self inside for a massage. Instead, we spent our last night in Santa Fe at the Railyard, a formerly scruffy part of town that has been spiffed up in recent years. Now it’s home to a thrice-weekly farmers’ market as well as an REI store and a branch of the local Second Street Brewery, which that day had rolled up its garage-door style walls to let in the afternoon breeze. A friend’s band was playing original country-rock tunes up front as the adults drank pints of India Pale Ale and our girl watched a few other kids run around on the outside patio. She ordered a “hamburdog’’ from the children’s menu and we asked for one last hit of green chili on our cheeseburgers before we headed back east.

If you go… What to do

Very interesting real estate story about the top 15 real estate markets over the next five years. Santa Fe lost the least in home values compared to the other 15 and is poised to be a top investment opportunity.

Please call if you need anything. Click in the link below. 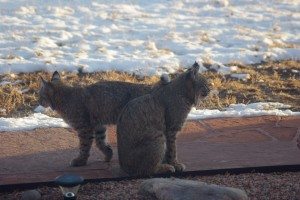 These two bobcats hung out in our front yard in Eldorado for a while this afternoon. I had never seen one before other than photos. They were gorgeous. Son was tapping on the windows to make then look at the camera. They were not scared at all. 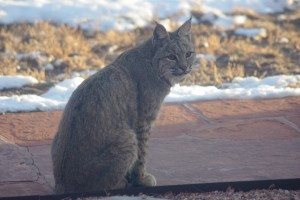 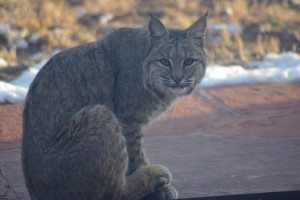 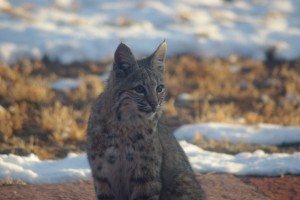 Santa Fe grabs ‘most artistic’ spot Santa Fe was rated the “Most Artistic City in America,” in a feature article published in The Atlantic this week.

Richard Florida, a senior editor at the magazine and director of the Martin Prosperity Institute at the University of Toronto’s Rotman School of Management, used data from the U.S. Census Bureau’s American Community Survey to rank cities based on the number of artists who live there compared to the overall population.

“It’s time to get over the notion that only large urban cities like New York or L.A. can make it as artistic centers,” the article says. “While it’s true that large cities and metros dominate in terms of sheer numbers of artists, smaller communities are home to vibrant artistic communities as well — many with national and international reputations and reach.”

Santa Fe has been named a top destination in several national publications this year. It ranked high on some lists in Travel + Leisure and was the third-favorite city to visit in the 2011 Condé Nast Traveler Readers’ Choice survey.